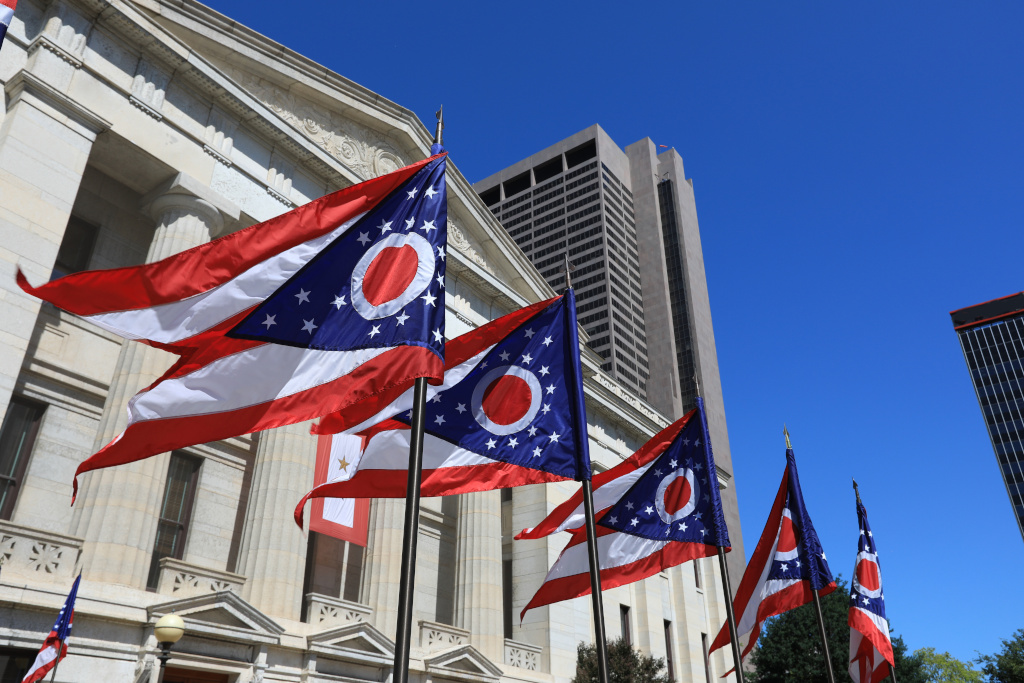 Discover auto insurance requirements, the best companies, and how to get the lowest rates in Ohio.

Ohio is the seventh-largest state in the country. It’s known by many for its Pro Football and Rock and Roll halls of fame. As of 2020, there were about 8.1 million drivers in the state. But even with all these drivers on the road, Ohio enjoys cheaper than average insurance rates.

In this article, we’ll break down everything you need to know about car insurance in Ohio. This includes taking a deep dive into how Ohio’s average auto rates stack up against the national average. We’ll also outline and thoroughly explain Ohio’s car insurance requirements and laws.

Your state’s average auto insurance rates are good to look at from time to time. They can help you find out if you’re paying too much each month for car insurance. Then, you’ll know if you need to seek out a better deal or stick with your current company.

Below is a table outlining Ohio’s average auto insurance rates for each major coverage type. Ohio’s rates are lower than the national average for all coverage types. Drivers in Ohio, on average, pay $22.31 less than the rest of the country.

Despite, this increase, Ohio’s liability rates have remained lower than the national average. This may be because Ohio’s auto repair costs are among the lowest in the country. A 2019 study by CarMD found that Ohio ranked 50th for average car repair costs. This means that claims will, in general, cost less for insurers in Ohio because it’s cheaper to repair cars.

Why Do Auto Insurance Rates Keep Increasing in Ohio?

Insurance rates in Ohio and every other state are likely to keep going up. This could be due to many reasons; however, inflation is the major culprit here. As inflation impacts the rest of the economy, insurance prices are bound to rise.

Also, people are driving more and getting into more accidents. This results in more auto insurance claims, which raises everybody’s premiums.

So, how do you get around constantly increasing prices? It’s important to shop around and compare quotes in Ohio. That’s the best way to get the cheapest rates.

Car insurance is a requirement in most states (the only exceptions are Virginia and New Hampshire). Every state has a unique set of minimum auto insurance requirements that drivers must follow. These requirements include the types of insurance and how much of each, at minimum, you need on your policy.

You will sometimes see minimum liability requirements written in shorthand form: “25/50/25.” This indicates how much of each coverage, in the thousands, you need.

Keep in mind that Ohio’s state requirements are just the bare minimum amount you need to drive. But accident costs can often go far beyond the minimum limit requirements. The auto insurance industry generally recommends bodily injury limits of $100,000 per person and $300,000 per accident.

Ohio doesn’t require any other type of auto insurance coverage. This means that, in Ohio, it’s optional to include UM and UIM on a policy. Before refusing this coverage when shopping for insurance, consider that Ohio ranks 21st for uninsured drivers. Per the III, an estimated 13% of motorists drive without insurance in the state. UM and UIM will protect you from having to cover any accident expenses out of pocket and it is relatively cheap to add to your policy.

Ohio requires that drivers carry valid proof of insurance with them at all times. Failing to show proof at a traffic stop or the scene of an accident results in severe penalties. One way to show proof is to keep your insurance policy with you and show that when the police ask for it. But it’s more convenient to carry an insurance ID card with you.

State law says that any insurer selling policies in Ohio must provide you with an insurance ID card that you can show to law enforcement. Insurance ID cards need to include the following to be valid:

Ohio allows logos and other information on insurance ID cards. It’s fine if your insurance company adds more information than needed on your card. But the state-required information must appear on the card or it’s invalid.

Note that Ohio permits both plastic and paper insurance ID cards. Digital copies on your mobile device are also valid. Be sure to check with your insurer about how to get an ID card on your phone. This is an easy way to avoid being caught without valid proof.

Keep in mind that drivers using a personal bond or self-insurance certificate must keep proof with them as well. Also, make sure your proof of insurance is with you in court in case you need to present it.

Many drivers don’t want to use an insurance company for financial responsibility (FR). Ohio gives you two ways to comply with the law without an insurance policy:

In Ohio, you may use a surety bond as a means for FR. You have two options for depositing bonds with the Ohio BMV for FR:

Another way to carry enough FR for your car is to receive a certificate from the Ohio BMV. This is where you deposit enough money to serve as proper FR for your car. You have two options using certificates to prove FR:

It’s against the law to drive without car insurance in Ohio. Any driver who fails to show proof of financial responsibility (FR) when asked by law enforcement or judge will face the following penalties:

If the police catch you with your license suspended, your vehicle gets immobilized, and you will need to surrender your registration for 30 days.

If you’re caught by law enforcement driving with your license suspended, your vehicle gets immobilized, and you will need to surrender your registration for 30 days.

The penalties for driving without insurance become severe after the third conviction. First, the state confiscates your vehicle and auctions it off. Then you’ll lose the ability to register any vehicle within the state for five years.

To find the best insurer, it’s a good idea to see who dominates the market share in the area. These companies are usually the most popular and biggest in the state. Their popularity doesn’t necessarily make them the best, but it’s a good place to start to find who people buy from. Here’s a list of the top auto insurance companies in Ohio by market share percentage:

Best Companies Based in Ohio

Ohio has several insurers that are based locally. This would be a good option if you want to support local businesses. Also, local insurers typically have benefits programs exclusive to residents in the area. Here are the top insurers based in Ohio (in no order):

Many states are what’s known as no-fault insurance states. These are states that require drivers to buy personal injury protection (PIP) to cover their injuries from an accident regardless of fault.

Ohio isn’t a no-fault state. It’s what many call a fault or tort state. This is where the at-fault driver in an accident is held responsible for all expenses. For this reason, Ohio requires drivers to carry a minimum amount of liability insurance to protect drivers who weren’t at fault.

How to Get a Rebuilt Salvage Title in Ohio

To get a rebuilt title for your restored salvage car, you need to follow a specific process. First, you’ll need to restore your car to a drivable condition making sure to keep receipts for all parts you use. Then you can schedule an inspection with the Ohio Vehicle Inspection Gateway. Here’s what you’ll need for the inspection:

After your restored car passes a state inspection, it should receive a rebuilt title. Keep in mind that you’ll need to pay all the fees associated with getting a new title for your car.

Once your car has a rebuilt title, you’ll need to get an insurance policy for it. Most major Ohio insurers cover cars with rebuilt titles. Be aware that insurance providers may only sell you liability coverage for it. Full coverage is usually off the table. You can also expect more higher rates. That’s because your rebuilt car may be street legal, but its claims history will follow it forever. We recommend shopping around and comparing insurance quotes for the best deal possible.

Some insurers will give you the option of adding full glass coverage to your policy at an extra cost. By doing so, glass repairs will not have a deductible. But remember that it will add to your monthly rates, so it isn’t truly a free repair.

If you find yourself in a car accident, you’ll likely need to file a claim. Even if you don’t, it’s always a good idea to let them know about the collision. Each state has rules for how you and your insurer should handle the claims process. This includes how long an insurer has to settle your claim and the deadline for you to file one.

How Long Do Insurers Have to Settle a Claim?

Insurers need to settle your claim by a certain deadline. In Ohio, insurers have 46 days to settle your auto insurance claim. Here’s how the deadline breaks down:

How Long Do You Have to File a Claim?

Insurers aren’t the only ones that need to follow deadlines with insurance claims. Ohio doesn’t set a specific time limit for filing claims. However, your insurer will more than likely have deadlines for you to follow. It’s always best to report an accident as soon as possible. Be sure to check with your insurer to see how long you have to file a claim.

In Ohio, an insurer may not cancel your policy after 90 days unless there’s a good reason to do so. Reasons for policy cancellation include:

It’s a common practice for insurers to use “price optimization” to set rates for consumers. This is where insurers raise your prices just high enough before you go elsewhere for a better deal. Ohio bans insurers from doing this. More specifically, insurers may not use factors “unrelated to risk” to change your rates.

Drunk driving is a dangerous decision. It can put yourself and others in harm’s way. You can also find yourself drowning in legal trouble after the fact. In Ohio, a DUI or operating a vehicle under the influence (OVI) penalty is when:

Keep in mind that getting a DUI/OVI won’t only cause you trouble with the law, it can affect your insurance. Your rates are sure to go sky high. Insurers may also label you as a high-risk driver, making it hard for you to get coverage. If this happens, you may need to turn to state-assigned risk pools or non-standard insurance.

Ohio uses a driver’s license points system to keep track of moving violations on your record. After you reach a total of 12 points in two years, the BMV will suspend your license for six months. But to reinstate your license, it’s not as simple as waiting out the suspension. Here’s how to get your license back:

Insurers also pay attention to which cars were the most stolen in each state. These cars are often a target for thieves. As a result, owning one of these could cause your comprehensive insurance rates to be higher than average. These were Ohio’s most stolen vehicles in 2021: