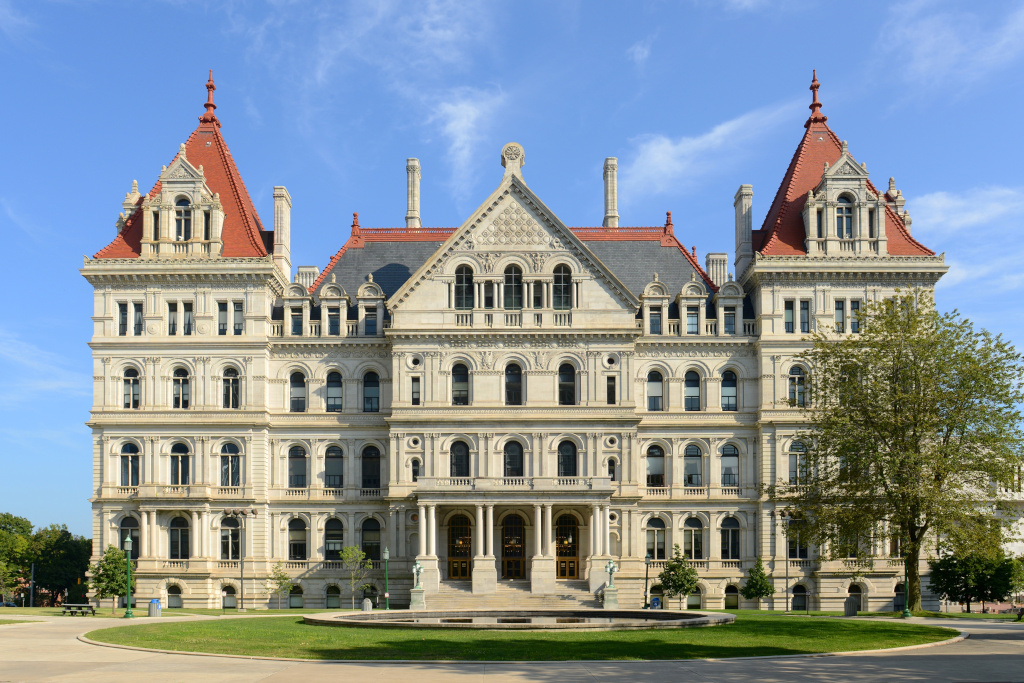 Discover auto insurance requirements, the best companies, and how to get the lowest rates in New York.

New York is the nation’s fourth-largest state. However, much of its population is based in New York City and its surrounding areas. In 2018, there were 3,867,577 drivers in that area alone. New York’s auto insurance rates are much higher than the national average because of how densely populated the state is. If you live in the Big Apple, you’ll likely see the highest auto rates in the state.

Like nearly every other state, New York requires car insurance to drive. It has requirements and policies that are unique to it. In this article, we’ll explore every aspect of car insurance in the Empire State. This includes taking a look at how the state’s car insurance rates stack up against the national average. We’ll also define and break down specific policies in the state.

Your state’s average car insurance rates are a smart metric to look at when you’re looking for coverage. Doing so can help you know how much you’ll end up paying. However, rates can vary depending on the driver. Insurers use a variety of rate factors to select your rates, including:

The table below displays a head-to-head rate comparison between New York and the rest of the US. For every coverage type, rates in this state are much higher than the national average.

The following graph shows New York’s average liability coverage rates from 2012 to 2019. Like the graph above, liability rates are much higher than the national average. Also, the rates have been increasing since 2012. They went from about $790 in 2012 to around $920 in 2019. The sharp difference between rates in this state and the US average is possibly due to the number of crashes and their resulting injuries and damages. In 2019, there were 876 fatal crashes, according to the Insurance Institute for Highway Safety.

The graph below shows New York’s average comprehensive coverage rates from 2012 to 2019. It also shows how rates here match up to the US average. Comprehensive coverage rates in this state are slightly higher than the national average. They’ve also increased from about $150 in 2012 to $180 in 2018. This is all before dropping to around $175 in 2019.

Car insurance is required in nearly every state. Only New Hampshire and Virginia don’t require liability to drive. Each state has its own minimum insurance requirements. State auto insurance mandates include the following:

Keep in mind that, while state minimum requirements are all you need to legally drive, they may not be enough to fully protect you. Some accidents can cost thousands of dollars in repairs and medical bills. Adding extra coverage is always a good idea, but it’s up to you.

Liability insurance is the only coverage necessary to satisfy most state minimums. But here in New York, you need four individual insurance types. Below is a list of all coverage type required and how much of each you need:

New York requires bodily injury (BIL) and property damage liability (PDL) to drive. Liability coverage protects other parties from having to pay out of pocket for damages and injuries you cause. Liability limits must be at least:

Buying the minimum required coverage satisfies the law. But the auto insurance industry recommends bodily injury limits of $100,000 per person and $300,000 per accident. It’s always a good idea to buy as much coverage as you can afford. This will lessen any risk of paying out of pocket for an accident.

Another requirement is personal injury protection (PIP). PIP covers medical bills for you and your passengers in an accident. It kicks in regardless of who caused the accident. You may also see insurers refer to PIP as no-fault insurance. Your policy must include PIP limits of at least $50,000.

New York requires drivers to buy uninsured motorist (UM) coverage. UM protects you if you get into an accident with a driver who has no insurance. It only covers injuries to you or your passengers. You’ll need to buy at least $100,000 worth of UM to satisfy the state requirement.

You may also buy underinsured motorist (UIM) coverage. However, it’s not a requirement. It’s up to you if you want to add it to your policy. It’ll protect you if you get into an accident with a driver who doesn’t have high enough limits to cover your expenses.

To register your car, you’ll need both of the above. Be sure to keep your State Insurance ID Card in your car at all times. Or be ready to display the digital version on your phone if need be. This ID card will show that you’re carrying the minimum amount of coverage required to drive.

You can self-insure in New York. This is where you opt to take full financial responsibility for your cars. It also means that you’ll pay for the other party’s expenses (much like liability coverage) if you cause an accident. You must apply for a self-insurance certificate to do this. The application comes with a $5 per vehicle fee. You’ll also have to put down a significant security deposit.

You should only choose self-insurance if you have enough to pay for the expenses in an accident. This is usually only an option for rich people.

It’s illegal to drive without insurance. It can bring you more legal and financial trouble than it’s worth. Plus, it can affect other drivers if you get into an accident. In New York, you could face steep penalties if you get behind the wheel without coverage. Here’s what may happen:

The insurance company you choose is an important decision and one that could mean the difference between saving or losing your time and money. It’s important to pick the best one for your needs. The best companies offer great rates and a wide range of benefits. To find the best insurer, you should look at the overall quality of each company. It’s also a good idea to see how an insurer’s rates compare with others.

A useful stat to look at when you’re trying to find the best insurance is market share in your state. This will help you find out who the biggest and most popular companies are in your area. The largest companies may not always be the best for you, but they’re good ones to take a look at. Below are New York’s top ten property/casualty insurers by market share:

New York is a no-fault insurance state. This means that it requires drivers to buy personal injury protection (PIP). PIP covers you or your passenger’s injuries and medical bills regardless of who caused the accident.

Salvage title vehicles are a popular option for people who want to use the spare parts or because it’s their dream car. New York’s DMV considers the following to be a salvage car:

Salvage title cars are illegal to drive in every state. Because of this, you can’t insure one. To legally drive one, you’ll need to restore it to a safe and drivable condition. Then, you can apply for a rebuilt title with the New York DMV.

How to Get a Rebuilt Salvage Title in New York

Once the State of New York issues a new title for your car, you should be able to get rebuilt title insurance coverage for it. Although, it may only qualify for liability-only policy because of its claim history. Prepare for higher rates and full coverage may not be available. However, each auto insurer has its own policies regarding rebuilt titles.

That’s why it’s so important to shop around and compare quotes from several companies. You may find a provider with coverages and discounts for rebuilds much cheaper than the others. You’ll for sure know you’re getting the best deal.

An SR-22 form is a document certifying that you have the appropriate amount of insurance. New York is one of the many states that use SR-22 forms. These usually aren’t a requirement unless you’ve committed a serious offense, such as a DUI or getting into an accident without coverage.

This is one of the few states that doesn’t require drivers to file an SR-22 form after a serious offense. Keep in mind that you’ll still need to carry the state-mandated coverage limits to drive.

Filing a claim with a car insurance company is a straightforward and necessary process if you get into an accident. Each state sets certain requirements for how insurers handle the claims process. This includes time limits for settling a claim. Like the insurer, you must also file the claim within a certain time limit.

After you file a claim, your carrier has 35 days to settle your claim. If they don’t, they must send you a written explanation.

Because of New York’s no-fault law, you have up to 30 days to notify your insurer of an accident. Otherwise, you won’t receive any benefits from your insurer.

New York sets rules for how you and your insurer can cancel your policy. There can’t be any mid-term cancellations after the policy has been in effect for 60 days. However, insurers may cancel your policy if you:

When you don’t pay your premium, it’s still possible to reinstate your policy. To do so, you’ll need to contact your insurer immediately and pay what you owe. Some insurers may even give you an extension. If you don’t pay it, your coverage can lapse, making it much more difficult to get a reinstatement.

Driving while under the influence of drugs and alcohol is dangerous and criminal. It puts yourself and others at risk. It can also cause you some serious legal and financial problems. Here’s what’ll get you a DWI conviction:

The exact penalty for getting a DUI/DWI varies from state to state. But you can expect the consequences to get more severe if you’re a repeat offender. Below is a breakdown of how the DWI/Aggravated DWI penalty system works:

Keep in mind that the total cost of a DWI goes beyond just fines, suspensions, and jail time. The police may impound your car and you could have to pay expensive legal fees. You can also expect to be labeled a high-risk driver and your rates to skyrocket. Insurers may even drop your policy.

New York uses a driver’s license points system. This is where, if you have a ticket or other violation go on your record, you’ll receive points. Having too many points against your license could cause the DMV to suspend it. The DMV may suspend your license if you have 11 points in 18 months. Here’s a partial list of what types of violations will add points to your record in the state:

Note: these are only some of the violations that will give you points. For the complete list, be sure to check with the DMV.