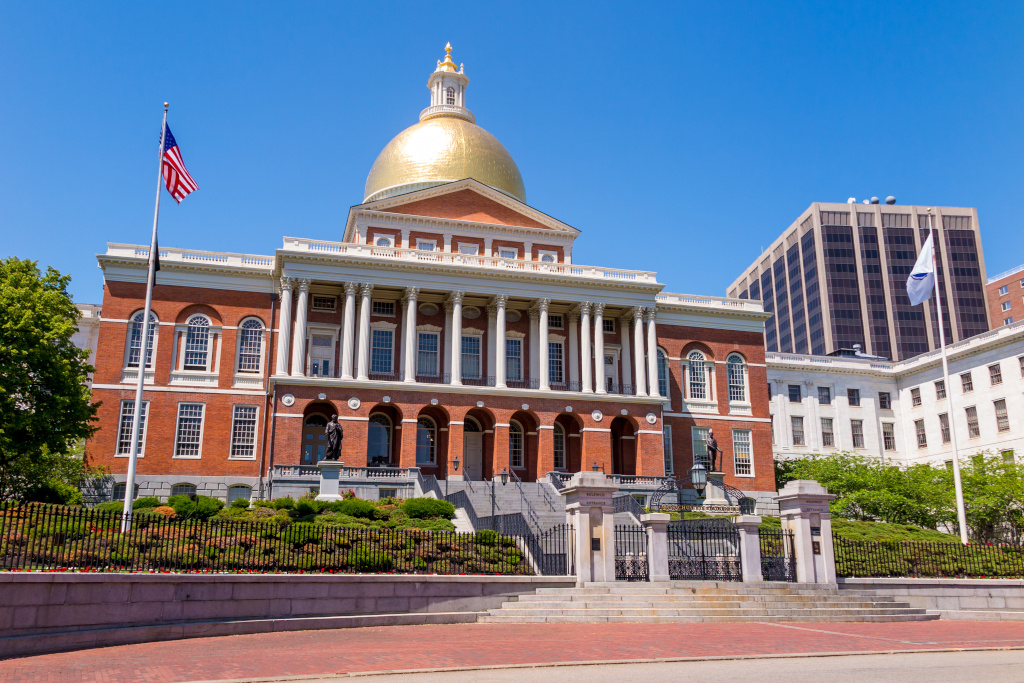 Discover auto insurance requirements, the best companies, and how to get the lowest rates in Massachusetts.

Massachusetts is the largest state by population in the New England area. It’s also the 15th-largest state in the country. Many know the state for being home to Boston and famous landmarks, such as Harvard University.

With Massachusetts’ large population, there are also lots of drivers on the road. There are about 4.9 million licensed drivers in the state. Massachusetts also tends to have higher average car insurance rates than the rest of the country.

Massachusetts, like several other states, requires coverage to drive. This page will teach you how car insurance works in the Bay State. This includes rate data, requirements, the best insurers, insurance laws and policies, and other key info.

If you’re shopping for car insurance, it’s a smart practice to see how much drivers in your state pay on average. This can help you find out how much you can expect to pay. It might also help you know if you’re paying too much for your current policy. Keep in mind that everyone’s rates are different. Insurers consider many factors when they’re setting your premium, such as:

The graph below shows the average full-coverage rates in Massachusetts from 2012 to 2019. Premiums increased about 21% during this time when they rose from $976 in 2012 to $1182 in 2019. Rates here have stayed above the national average for the entire period. However, the gap has closed quite a bit as time went on.

Insurance is expensive in this state for several reasons. One is that the state’s drivers are mostly centered in large cities, like Boston, Worcester, and Springfield. Cities are typically a hotspot for accidents and claims. This results in higher rates. Another reason is that Massachusetts has a higher cost of living than most states. This causes insurance rates to be higher, in general.

In this graph, you can see the change in average Massachusetts liability coverage costs from 2012 to 2019. Liability costs climbed from $578 in 2012 to $664 in 2019. This was an increase of $86, or 14%. Like with the full coverage graph, premiums remained above the US average during this time.

One reason for the Bay State’s higher liability rates is due to the expensive health costs. Massachusetts ranks third in the country for health costs per person. This could cause liability insurance claims to be more expensive per person. As a result, rates would likely be higher for everyone in the state.

The next graph shows the average Massachusetts collision coverage costs from 2012 to 2019. Collision coverage rates increased by $104, or 30%. Rates went from around $343 in 2012 to $447 in 2019. Much like the other coverage types, collision rates here are above the national average, too.

With each of the coverage types above, rates steadily increased over the years. This will likely continue. As inflation occurs, the cost of health care, litigation, and auto repairs will generally rise. This makes insurance claims more expensive for providers. Because of this, rates will continue to climb.

Every state, except for Virginia and New Hampshire, requires auto insurance to drive. However, requirements vary by state. Minimum requirements in Massachusetts include:

In Massachusetts, you need to buy a policy to register your vehicle. Without carrying the proper coverage, you could lose your car registration.

Massachusetts requires you to have basic liability coverage on your policy. This covers any damages or injury costs that you cause in an accident. It exists to protect other drivers from having to pay out of pocket. You must carry liability limits of at least:

You may see the state’s minimum liability requirements in a shorthand form: “20/40/5.” This refers to the minimum amount of coverage, in thousands of dollars, that you need.

Buying the minimum amount of car insurance is all you need to drive legally, but you may need more. Costs from an accident can get into the thousands and often exceed your limits. It’s best to buy as much coverage as you can to avoid paying for accident costs out of pocket.

Massachusetts also requires you to carry personal injury protection (PIP) on your policy. This will cover your injuries from an accident regardless of who was at fault. You may also see the state or insurers call PIP “no-fault insurance.” State law requires you to have at least $8,000 of PIP per person for each accident.

You must have uninsured motorist coverage (UM) to drive in Massachusetts. UM protects you and your passengers from having to pay for injuries and damages that an uninsured driver causes. You must carry UM limits of at least:

Underinsured motorist (UIM) coverage isn’t required. But for just a bit more each month, UIM protects you when you’re in a car accident with a driver with too little coverage to pay for all damages. They may have the bare minimum requirements and satisfy the law, but that won’t pay for severe injuries after coverage limits are reached.

Unlike most states, Massachusetts doesn’t require you to carry proof of insurance in your car. This means you won’t need to worry about providing an insurance ID card at a traffic stop or after an accident. This is because your car registration will already have your insurance information.

In Massachusetts, self-insurance isn’t an option. However, you can file a surety bond with the state instead. The bond you deposit needs to display an ability to meet the state’s minimum insurance requirements.

When you’re shopping for insurance, it’s crucial that you find the best company for you and your situation. The best companies put their customers above anything else. To find the best insurer, you’ll need to look at the overall quality of each one. This includes looking at key qualities, such as:

Best Companies Based in Massachusetts

Massachusetts is a no-fault insurance state. These are states that require you to add personal injury protection (PIP) to your policy. This is because PIP covers your injuries regardless of fault. You must have at least $8,000 worth of PIP on your policy to drive.

Instead of a percentage, Massachusetts requires insurers to use the total loss formula (TLF) to decide whether or not a car is totaled. With the TLF, a car is a total loss if the car’s damage costs plus its salvage value exceed the ACV. If your car isn’t a total loss, you’ll be able to get it back and repair it.

If your car is a total loss, it’ll receive a salvage title. Salvage titles cars are illegal to drive. It’s also impossible to insure cars with salvage titles. You must get a rebuilt or reconstructed title to be able to drive the car again.

How to Get a Reconstructed Title in Massachusetts

You can insure cars with reconstructed titles in Massachusetts. But it may be hard to get full coverage. Insurance companies aren’t fond of previously totaled cars. Because of this, providers will likely only offer you a liability-only policy.

Insurance coverage for a reconstructed title car will also typically cost more. Rebuilt cars carry more of a risk and can be more expensive to repair. Be sure to shop around and compare quotes to find the best rate for your rebuilt car.

If you end up in an accident, you’ll likely have to file a claim. This should be a simple and painless process. Like other states, Massachusetts gives you the right to protect yourself during the claim process.

What to Expect After Filing a Claim

You may need to file an SR-22 form in Massachusetts if you have a serious driving offense, such as a DUI. SR-22 forms ensure that you have the minimum amount of insurance on your policy. A court will usually be the one to order you to file an SR-22. Your insurer can file the form for you. Be aware that you’ll need to pay a minimal filing fee to your insurer.

In many states, insurers may use your credit history as a factor in determining your rates. Massachusetts bans insurers from using your credit score to decide your rates. They also may not use it to drop or deny your policy.

Massachusetts affords you the right to cancel your auto insurance policy at any time. But your company may financially penalize you for dropping the policy before it expires. At the same time, your insurer may also cancel your policy early for good reasons, such as fraud, license suspension, or not paying your premium. In this case, they’ll need to give you at least 20 days’ notice.

When you lose your policy for not paying for premium, your insurer will give you the chance to reinstate it. Most insurers have a grace period for you to pay your bill. After that, your coverage will lapse, making it extremely difficult to reinstate your policy. The best way to save your car insurance policy, is to pay your premium as soon as you can.

You’ll receive lower rates if you go a certain time without traffic violations or at-fault accidents. Similarly, your rates may go up if you rack up tickets and at-fault accidents on your record. The state doesn’t require insurance companies to use the SDIP, but many of them do. Be sure to ask your agent about what your insurer uses to keep track of safe or unsafe driving.

Driving while under influence of drugs or alcohol is a bad choice. It puts you and others in danger. Also, it can cost you thousands of dollars, ruin your record, and maybe even result in jail time. In Massachusetts, you’ll get a DUI if your blood alcohol content (BAC) is 0.08 or higher (or 0.02 or lower if you’re under 21). Commercial drivers will receive a DUI if their BAC is 0.04 or higher.

Getting a DUI won’t just get you in trouble with the law. You can expect your rates to go way up afterward. Insurers will view you as a high-risk driver. This will make it hard to get coverage in the future and may force you to turn to non-standard insurance or state-assigned risk pools.

Massachusetts doesn’t use a driver’s license points system to keep track of violations on your record. They do, however, keep a record of tickets, accidents, and suspensions. This record is public information. Anyone may request a copy of it, including insurers.

Most Popular Cars in Massachusetts

Each state has a different group of the most popular cars. These vehicles sell the most throughout the year. Here were the most sold cars in 2021:

Most Stolen Cars in Massachusetts

Insurers pay attention to which cars thieves target most each year. These cars are more likely to be stolen than others. Owning a car that thieves target often could result in a bump in your rates. These were the most stolen vehicles in 2021: