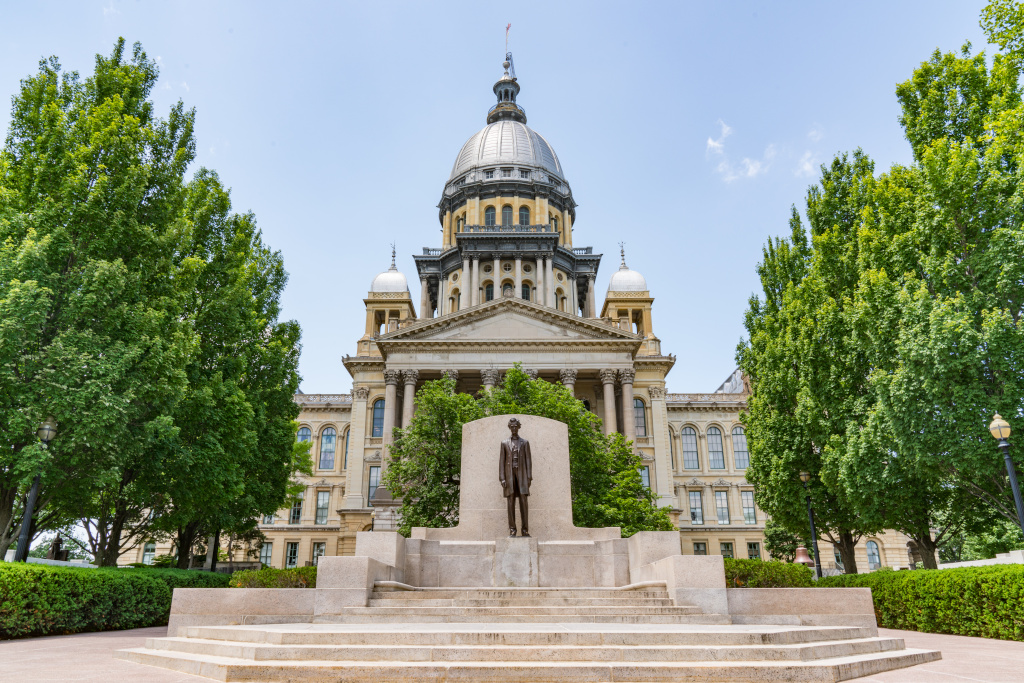 Discover auto insurance requirements, the best companies, and how to get the lowest rates in Illinois.

In this article, you’ll learn about how car insurance works in Illinois. This includes a breakdown of how Illinois’ average auto insurance rates stack up against the US average. We’ll also explain specific laws and policies.

Your state’s average auto insurance rates are important to think about because they can help you get an idea of how much you can expect to pay. They can also paint a picture of how your state’s insurance prices rank against the rest of the country. This info can help you know if you should switch companies to find a better deal or stay with the same provider.

In the table below, you can see how Illinois’ average auto insurance rates match up with the national average. Drivers in Illinois pay less for every type of coverage. Their total price per month is also lower than the US average at $78.30.

Almost all states require car insurance. Only New Hampshire and Virginia don’t require it to drive. Each state that does sets minimum requirements. This usually includes:

Keep in mind that Illinois’ car insurance requirements are only the bare minimum. It’s always a good idea to add as much coverage as you can afford. If the costs of an accident go over your policy, you could end up paying out of pocket.

Illinois requires you to have liability insurance on your policy. This covers any damages or injuries that you cause to other parties in an accident. State law requires you to carry at least:

Illinois also requires you to carry UM and UIM coverage on your policy. This type of coverage protects you from having to pay out of pocket if you get into an accident with an uninsured or underinsured motorist. The state requires drivers to purchase uninsured motorist coverage (UM) with limits of at least:

Per the III, Illinois ranks 18th in the nation for uninsured motorists. This means that, while most drivers have the required liability coverage, 13.7% do not.

In Illinois, you may only self-insure if you own 25 or more vehicles. You must also be able to meet the $95,000 minimum liability requirement. You’ll also need to obtain a self-insurance certificate from the state. Because of the steep financial requirements, self-insurance is mainly for business owners or wealthy individuals.

Driving without insurance in Illinois can result in serious penalties. The only exception is if you’re able to prove after 30 days that you had minimum liability coverage for that vehicle. Otherwise, here’s what’ll happen if you’re caught driving without any coverage:

When you’re shopping for car insurance, it’s important to find the best company. But how do you find out which company is the best? The best auto insurers are those that have excellent customer service, great benefits, and competitive rates. It’s smart to do some research before you select a company.

Looking at who owns the most market share in your state is one way to find the best company. While the biggest companies aren’t always the best, they’re usually the most popular. Below is a list of the top car insurance companies in Illinois by market share:

You can also find the best companies in your area by looking at J.D. Power rankings. J.D. Power scores insurance companies out of 1,000 based on their overall customer satisfaction. This can help you identify the companies with the best benefits, rates, and customer service.

Below is a list displaying the companies with the highest J.D. Power ranking in the North Central area (Illinois and several other states, such as Michigan, are part of this list):

Your insurer will declare your car a total loss if the cost of the damages outweighs the actual cash value (ACV). Every state has its own criteria to decide when a vehicle is a total loss. Some states use a percent threshold, where if the damages exceed a percentage of the car’s value, it’s a total loss.

Illinois, on the other hand, uses the total loss formula (TLF) to declare a car as a total loss. With the TLF, a car is a total loss if the damages plus the salvage value are more than its ACV.

If your insurer declares a car to be a total loss, it’ll receive a salvage title. Salvage title cars are illegal to drive and are usually in poor condition. It’s common for people to buy a salvage car and then restore it to a drivable state. Then, it can receive a rebuilt title.

How to Get a Rebuilt Title in Illinois

Getting a rebuilt title for your car isn’t as simple as repairing the car, though. You’ll need to go through a title application process with the Illinois Secretary of State (SOS). Here’s what you’ll need to submit when you apply for a rebuilt title:

Once your salvage passes inspections and receives a state-issued rebuilt title, you must insure it before driving. Luckily, most providers in Illinois cover these vehicles. So, you should have little trouble finding rebuilt title insurance. The catch is that you may only be able to buy a liability-only policy. It’s unlikely you’ll find an insurer willing to write you a full coverage policy.

Car insurance for rebuilt titles is often expensive. This is because rebuilt cars were totaled at one point and aren’t as safe as normal vehicles. Its claim history is permanent and any insurer has instant access to it with a VIN.

Even though auto insurance for your rebuilt car will be more expensive than normal, you can still find ways to pay less. Discounts are a great way to lower your monthly costs. You can also compare quotes from various companies to find the lowest rates.

Once you file the SR-22 form, it’ll be on your record for three years. If you fail to maintain insurance during this time, your provider will have to inform the SOS. They’ll then suspend your driving record until you’re able to regain coverage.

If you don’t want to file an SR-22 form and buy traditional insurance, you may also:

What to Expect After Filing a Claim

After filing a claim with your insurance company, it becomes a waiting game. Luckily, insurers have to follow state laws. These state laws protect you and set deadlines for insurers to adhere to. Insurance companies in Illinois must respond to your claim within 15 working days. They then have 30 days to settle the claim.

Insurers often use your credit score as a way to determine how much you pay for coverage. But some states, such as Washington and California, don’t allow this. Illinois doesn’t have any laws to stop insurers from using your credit score to set your rates. Carriers may also use your credit history as a means to deny or drop your policy.

Reinstating your policy is still possible if you missed a payment. Most insurers give you a grace period to pay your bill. After that, your coverage will lapse, resulting in a whole host of issues. To reinstate your policy, pay your rates ASAP. If you avoid a lapse, your policy should continue as if nothing happened.

Drunk driving comes with lots of consequences. It puts yourself and others in danger. You can also expect steep legal trouble to come your way. After each offense, penalties get worse. Here’s what’ll happen if you are convicted of a DUI in Illinois:

The total cost of a DUI is far more than initial fines and legal fees. You can also expect your rates to see a massive increase. It’s also likely that you’ll become a high-risk driver and may need to buy non-standard insurance.

The most popular cars vary based on the state that you’re in. Car insurance companies pay close attention to which vehicles are the best sellers. These cars may see higher rates because they’re a target for thieves. These were the most sold cars in 2021 in Illinois: