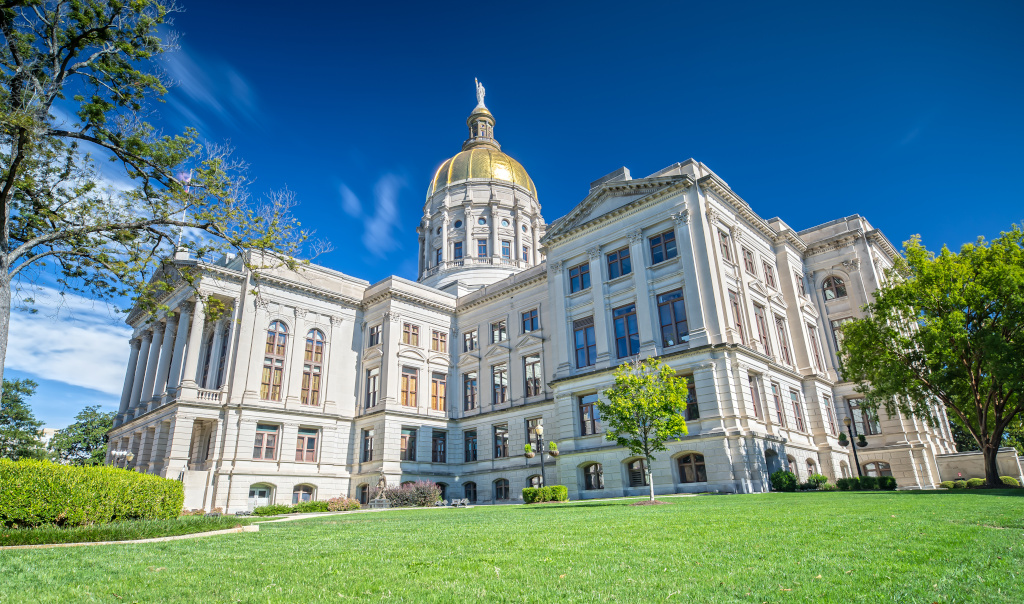 Discover auto insurance requirements, the best companies, and how to get the lowest rates in Georgia.

Georgia, the Peach State, is known for its warm climate and agriculture. The state is the eighth-largest in the US by population. There are also about 6.9 million licensed drivers in Georgia. Many of them live in large metropolitan centers like Atlanta and Augusta.

With all the drivers on the road, it’s necessary to protect yourself. Georgia, like most other states, requires car insurance to drive. This article will break down everything you need to know about auto insurance in Georgia. This includes an in-depth look at how much Georgia residents pay for coverage on average. We’ll also teach you about state laws relating to car insurance and driving.

The table below shows the average car insurance rates for Georgia and the US as a whole. On average, Georgia residents seem to pay much more than the rest of the country. The average price per month for car insurance in Georgia is $104.95. That’s $15.75 higher than the national average.

The graph below shows Georgia’s average liability coverage rates between 2012 and 2019. Liability coverage in Georgia increased from $454 in 2012 to $829 in 2019. That’s an increase of $375, or an incredible 82%. In just seven years, Georgia went from slightly below the national average to well above it.

Georgia’s average collision rates may be higher because of the cost to repair a car in the state. Per a study by CarMD done in 2019, Georgia ranks third in the country for car repair costs. This makes claims more expensive for insurance companies to settle, resulting in higher rates for all.

In Georgia, you need at least liability coverage to drive. It’s the only type of insurance that the state requires.  It protects you from having to pay out of pocket for damages or injuries you cause in an accident. You’ll need to maintain minimum limits of at least:

While insurance is a state requirement in Georgia, some people disregard this and get behind the wheel anyway. UM and UIM coverage protects you from expenses that an uninsured or underinsured driver cause in an accident.

Unlike some states, Georgia doesn’t require you to carry UM and UIM on your policy. Despite this, it’s still a good idea to buy it. Per the III, about 12.4% of drivers in Georgia in 2019 were uninsured. Getting into an accident with an uninsured driver could be a disaster. UM and UIM would help you avoid out of pocket costs.

You can self-insure your car(s) in Georgia. To do so, you’ll need to obtain a self-insurance certificate from the Georgia Insurance and Safety Commissioner’s Office (ICO).  You can get the certificate by sending an application to the ICO. The application should include:

In Georgia, you need to maintain insurance at all times for any registered cars. It’s illegal to drive your car without insurance. Getting into an accident or being pulled over by the police without proof of insurance can result in several penalties. Here’s what’ll happen on the first offense:

When you’re looking to buy car insurance in Georgia, you’ll have many options to choose from. But how can you be sure which one is the best? It’s wise to compare each company by their overall quality. The best auto insurers have the following features:

For a full breakdown on the best of the leading insurers, we suggest reading our article on the top car insurance companies in the nation.

One way to find the best insurer is by looking at who owns the most market share in your state. This will help you find the biggest companies in the area. Keep in mind that the biggest insurers aren’t always the best. But they are the most popular among other drivers, so it’s a good place to start. Below is a table showing the top companies in Georgia by market share:

You can also find the best insurer by looking at a company’s J.D. Power rating. J.D. Power ranks companies with a customer satisfaction score. This will help you find the company that treats its customers the best in Georgia. The table below lists the top companies in the Southeast US region (this includes states such as Georgia, Alabama, and Kentucky) by J.D. Power rating:

A no-fault state requires drivers to buy coverage such as personal injury protection (PIP) to cover their medical expenses. PIP covers the driver’s expenses regardless of who caused the accident.

Georgia isn’t a no-fault state. It’s a fault state, where drivers that cause an accident are responsible for covering the costs of all parties. This is why you need liability insurance to drive in Georgia. Otherwise, you would be on the hook for potentially thousands in damages.

Your insurer will declare your car a total loss if the damages cost more than your car’s actual cash value (ACV). Every state has its own rules for how and when a car becomes a total loss.

Georgia uses the total loss formula (TLF) to decide if a car is totaled. With the TLF, a car is a total loss if the damages plus the salvage value are more than the ACV. If your car isn’t a total loss, your insurer will return it to you so that you may repair it.

Once a car becomes a total loss, it will receive a salvage title. Salvage title cars typically have lots of damage and aren’t drivable. It’s illegal to drive a salvage car in Georgia. To drive it, you must repair it to a roadworthy condition and then get a rebuilt title.

How to Get a Rebuilt Salvage Title in Georgia

Once you have a Georgia-issued rebuilt title for your car, you’ll need to insure it. Don’t worry, you should have no trouble getting insurance coverage for a rebuilt title. However, you may have to settle for a liability-only policy. Full coverage might not be an option because of the car’s accident history.

In general, cars with rebuilt titles cost much more to insure than regular vehicles. This is because, although they’ve been restored, they may not be as safe as standard cars. And a vehicle’s claim history never goes away and factors into how much you pay. With this in mind, it’s important to try to find the lowest rates. Shop around for rebuilt title insurance from multiple companies to find the best deal.

Some states, such as Florida and Kentucky, require insurers to replace your windshield with no deductible. In Georgia, insurers don’t have to repair your windshield damage for free. This means you’ll have to pay a comprehensive coverage deductible if you file a claim.

Insurers can, however, offer full glass coverage at an extra cost. This coverage will replace your windshield for free, but it will add to your monthly rates.

How long do insurers have to settle a claim?

How long do you have to file a claim?

While insurers have to follow deadlines to settle your claim, you also have to file in a certain amount of time. The exact amount of time depends on your insurer. But you should try to file an auto insurance claim ASAP after the accident. Be sure to check with your insurance provider about how long they give you to file a claim.

Also, keep in mind that if the accident wasn’t your fault, you’ll have to file a claim with the other person’s insurer. This means you must follow that company’s deadlines. So, make sure to check their deadlines as well so that you don’t miss the date.

Some states, like California and Hawaii, don’t allow insurers to use your credit score as a way to set your rates. However, Georgia doesn’t have any rule that prevents insurers from doing so. This means that insurers in Georgia can use your credit history as a factor in determining how high or low your rates are. They can also use it as a means to deny you a policy.

Georgia insurers may cancel your policy without any notice if they have a good reason to do so. These reasons include:

When you lose your policy due to a missed payment, it’s still possible to get a reinstate it. To do so, you’ll need to pay everything you owe as soon as you can. If you don’t pay within your insurer’s grace period, your coverage will lapse. After a lapse, it becomes very hard to reinstate your policy.

Drunk driving is one of the worst decisions you can make. It puts everybody around you (including yourself) at risk and can result in tons of legal trouble. In Georgia, there are two types of DUI convictions:

Keep in mind that the true cost of a DUI goes far beyond fines and license suspensions. Your insurance rates will go way up after a conviction. You could even lose your policy altogether because you’ll now be a high-risk driver.

Georgia uses a driver’s license points system to keep track of your moving violations. Georgia’s points range from two to six, depending on how serious the violation is. Racking up 15 points in 24 months will result in a license suspension.

It’s possible to reduce the number of points you have on your record. After five years, you can take off up to seven points. But there’s a catch. To reduce points, you have to complete the following steps:

Most Popular Cars in Georgia

Most Stolen Cars in Georgia

Like with the most popular cars in each state, insurers also keep an eye on which are the most stolen. Owning a car that thieves frequently target may result in higher comprehensive coverage rates. In Georgia, these were 2021’s most stolen vehicles: